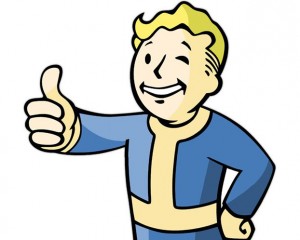 For those of you who’ve played the two games prior to Fallout 4, you will have encountered Deathclaws.  These beasts tower above you, are fairly well armored, extremely fast, and have a variety of attacks – both ranged and melee.  And by melee, I mean high-speed razor-sharp claws of doom. They’re scary, and you see one fairly early on in the game of Fallout 4.  I was shocked that they had scripted such a formidable opponent so soon after your escape from the vault, even considering some of the ways they made it somewhat easier to deal with.

If this was your first time playing any Fallout game, a Deathclaw might seem like a boss-level character, especially given your likely low-level when hitting this one.  I’m fairly thorough when playing open-world games, and even grabbing every XP possible, I was still only level 3 at my second passthrough.  That’s a fairly weak character, especially when compared to a Deathclaw.

The good news is, this heavily-scripted encounter is designed as a part of the main quest, and is a tutorial of sorts.  A scary, heavy-handed tutorial, but a tutorial nonetheless. You thought the raiders were challenging? Well, jump into your vintage set of power armor, rip that mini-gun off the useless Vertibird and let’s go fight one of the more challenging enemies in the game! But wait…. Here are some things to think about before you go:

Early in the game, when you meet your first deathclaw, it will probably be stronger than you. Notice the skull.

Your first experience with an enemy NPC that is significantly stronger than you.  Because of this, the game developers set things up in such a way that makes this fight completely unlike a random encounter in the woods. Use this “setup” to your advantage.

You don’t have to go outside and fight with the damaged armor, unless you want to!  You can usually fast travel directly from the roof, back to Sanctuary, and repair your armor in the safety of your home-base.  Go ahead, take your time, fix it up to 100%, and if you have enough resources and skill, you can even upgrade the armor pieces.  After the armor is just the way you like it, hop back in, and fast travel back to Concord. It will put you a safe distance away from all the enemies so you can plan your strategy. 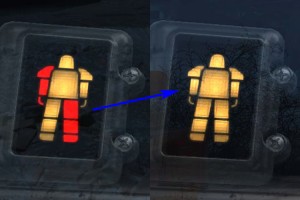 You don’t need to go off into battle with damaged armor. Go fix it first!

Make sure you have the companion, Dogmeat, before you go to Concord.  For sure, you could take Codsworth with you, and I’m sure he’d work just fine, but please don’t go at this fight alone, unless you like it that way.  I prefer to in with Dogmeat because he doesn’t talk, he’s a dog (dog’s are awesome), he’s invincible and he attacks everything with you.  Plus, when he kills something for you, you get the experience points too. Nice, eh?

Save your game.  Now!  Quicksave, manual save, it doesn’t really matter.  But seriously, save your game.  You might survive, or you might die.  Do you know when your last save was?  You could have to replay a lot of the game, and you don’t want to be frustrated.  When you see a Deathclaw, just save the game. 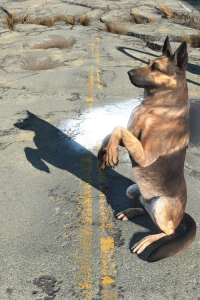 Dogmeat is always willing to entertain, for those moments when you need entertainment.

So…now you’re all geared up! Perhaps inside your 100% repaired power armor, brandishing your weapon of choice – which may or may not be the mini-gun – with your friendly companion by your side.  It’s a glorious day, and you feel like you’re ready to enter the fray.  But not so fast.  You came here for tips and tricks, so let’s talk about a few before you run off and get yourself killed. 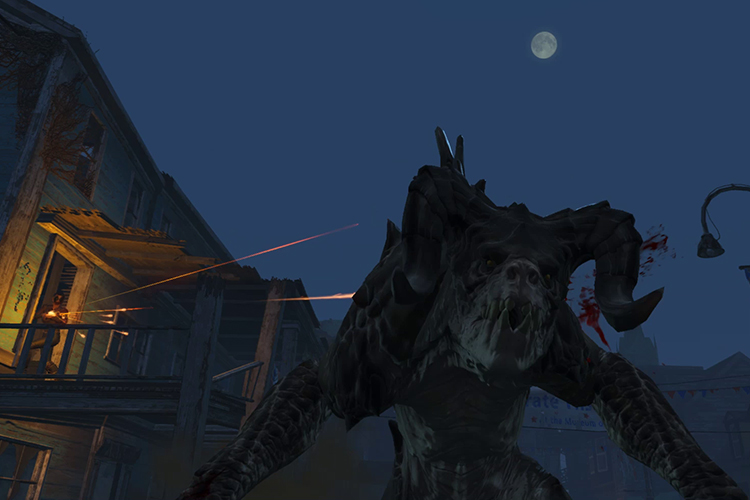 Sadly, once the Eye of Sauron (or Deathclaw) is upon you, not even a shot to the head from another enemy will draw its attention away…from you! 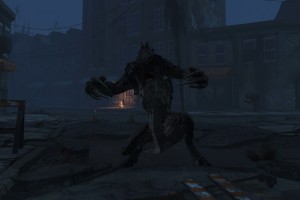 Now would be a great time to use VATS to hit this guy in the belly once or twice, then run because… 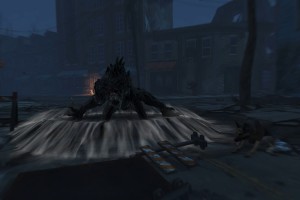 The beginning of the shockwave that is the Deathclaw’s area attack. Best to avoid.

As you can see, there are many effective strategies you can employ against a Deathclaw.  They aren’t invincible, they’re just tough. The first scripted Deathclaw you experience in Concord is probably a default level 22 creature.  That’s not really a fair fight, even armed with a full suit of completely-repaired power armor, and a mini-gun.

Make sure you tilt the odds in your favor by using the tips and tricks above.  And don’t forget Dogmeat!  Bark! 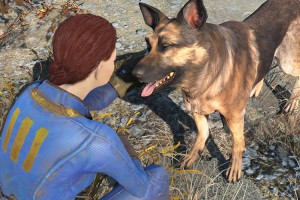