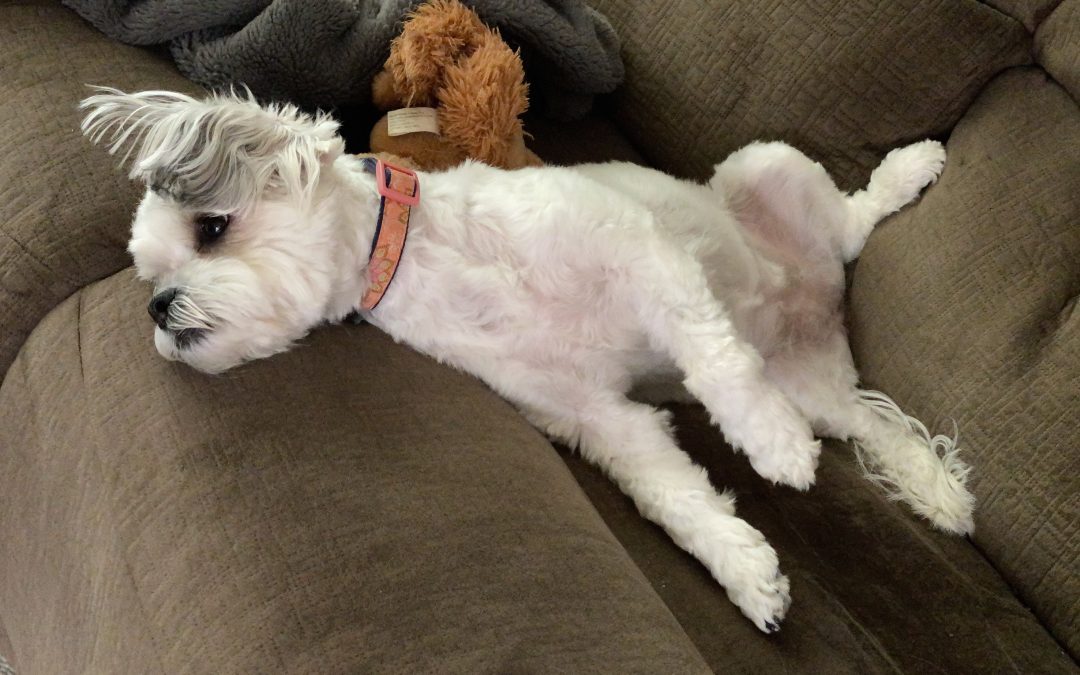 The featured image of the day is Annie looking ridiculous. Ridiculous: one of those words I have a difficult time spelling without my spell checker. I mean, that’s okay, but it’s still an annoyance. Usually what I’ll do is, sign myself up to watch the trouble word over on Wikipedia (I’ve been a Wikipedia editor for over 13 1/2 years now) and that way, when I see one of the many, common misspellings for a word, I correct it. That helps me to learn. One of my favorite words to correct is “occurred” and, of course, “occur.” I’ve corrected so many misspellings of that word, I basically have it down now. I also enjoy editing grammar and spelling. It’s one of those things I enjoy. Sadly, it’s not one of those things I enjoy doing to my own work, especially when it gets to be novel-sized. A page or two? Fine. But anything story-sized is annoying.

So, Father’s Day weekend was 50% awesome, 50% crappy. If you read my previous blog entry, my last Saturday was destroyed by Microsoft’s Windows Insider Program. So much so that, when Apple invited me (well, invited all of the Apple products I own, really…) to join the AppleSeed program and help beta test all the new software releases, I laughed, and just ignored the messages. How does that song by The Who go? “Won’t get fooled again!” Not today, Satan.

But yes, the other half (Sunday, actual Father’s Day), was pretty cool. I got some awesome cards, a fun piece of custom art, a bag of assorted Swedish Fish, and…two, awesome, “National Forest, Camp Squirrel” signs. These signs are made of cedar and they smell so good! And, I guess, because they’re made of cedar, you can put them outside in the garden. Which I’ll probably do with one of them, and keep the other one inside, in a big potted plant. They’re so pretty, I want to see them regularly, and I’m an indoor cat.

So, I have to admit, I got a Father’s Day gift that arrived today, and I was all excited about it…the build-up was incredible! Now, I may have mentioned this before, but I make a few vegan pizzas every week. It’s just something I do. And I use a wooden peel to stage and put the pizzas into the oven. It’s perfect! But recently, I’ve been giving the dough time to rest and relax a little more, a little less rushed, and the pizza dough goes from a small/medium size to a large size in just a few hours! So large, in fact, that it really doesn’t fit on the peel. So I was like “I’d like a larger peel!” I was thinking an inch larger in diameter, with the same sized handle. So it comes in, and the Amazon box is FOUR FOOT TALL and I’m like “Well, that’s just the box in a box thing, right?” Wrong.

It was a peel in a box, and it fit perfectly. And the peel was HUGE! Like two or three inches in diameter larger, and then the handle was like three feet long! Like, more than two times the length of the peel I currently use. I was like “WHOA!” And you know, it’s a gift, so you try to be graceful, but it just doesn’t work for me. So it’s going back to Amazon by way of Kohl’s tomorrow, and I think my next peel is going to be carefully specified, so there aren’t any surprises. I’d go so far as to say I’d shop in a store, so I could physically feel the peel before buying, if we weren’t in the middle of a growing pandemic, during which I would love to avoid getting sick, thank you very much!

I’m sharing the picture with you above, because what I got in the box is NOT the same aspect ratio as the one in the picture. I don’t know if they made a mistake in shipping me the wrong one, or if someone got lazy and didn’t take a picture of the one they sent me, but it’s comically too big. Now, I do realize that “big” is hard to judge in a picture. But what is NOT difficult to judge is the ratio of “peel” to “handle.” And the peel-to-handle ratio in this picture is ideal. It’s a perfect pizza peel. What I got had a comically long handle that absolutely did not match the picture above. So…it gets returned. Blah.

Oh, and just as a humor-thing, I was trying to find a place to PUT the 4″ monstrosity, and I realized that the only place I could put it was on top of the oval hanging pot rack. It just fit. I put it up there and I was like “that thing’s too big.” I mean, way too big. It’s probably just right for a pizza kitchen? But not my kitchen, with the island in the middle…things are a little cramped.

Anyway, that’s enough about the pizza peel, so I will leave you with an adorable picture of Annie….